To protect Pentest Factory’s own IT infrastructure against attacks, internal penetration tests are an essential part of our strategy. We hereby put an additional focus on systems that process sensitive client data. In a penetration test of our homepage prior to our initial go-live, we could identify two vulnerabilities that we forwarded to the vendor for a patch.

Both vulnerabilities were fixed in the subsequent release and can not be exploited in current software versions anymore. The details of each vulnerability will be described in this blog article.

NEX Forms is a WordPress plugin with >12.000 sales. It allows creating forms based on a variety of templates and offers several functions for managing form submissions. The plugin offers a function for the generation of submission reports. These reports can then be exported into PDF and Excel formats. We were able to identify the following two vulnerabilities within this component:

The “Reporting” section of the NEX Forms backend allows users to aggregate form submissions and to export them into the PDF format. As soon as a selection is exported into PDF, the server saves the resulting file under the following location: 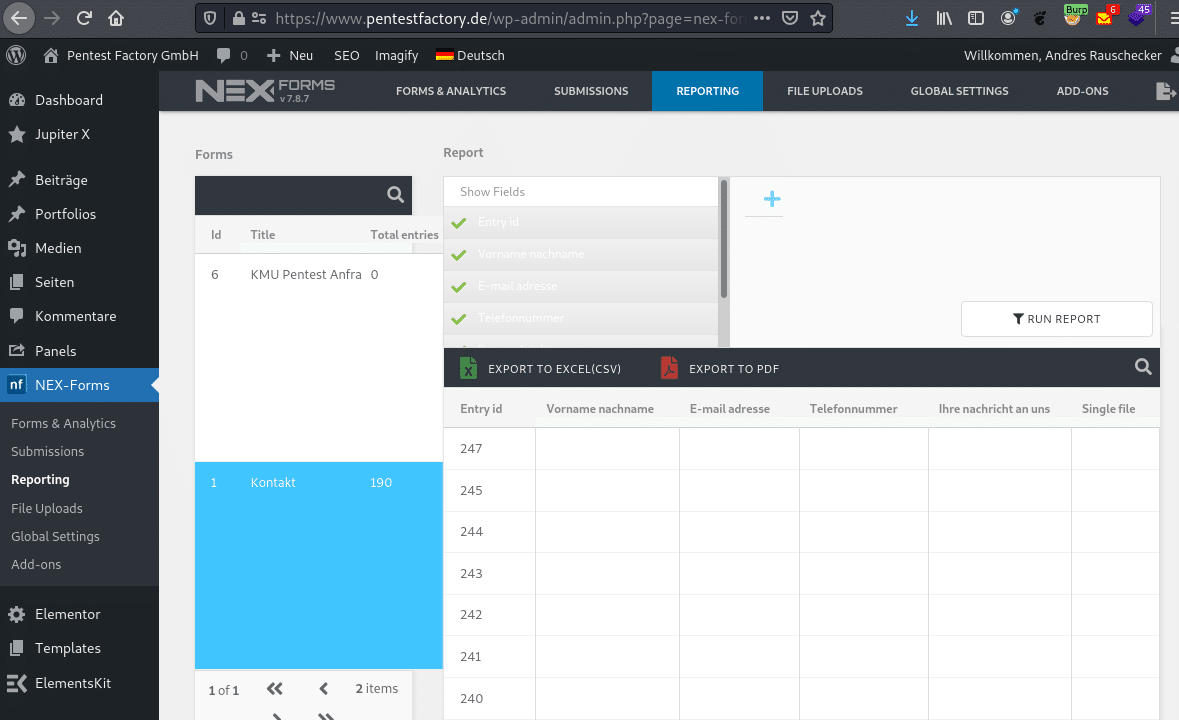 During our tests, we noticed that the exported file is not access protected. An attacker is thus able to download the file without authentication:

Similar to the previously described finding, another vulnerability for the Excel file export exists. Here the file is not saved in the file system, but directly returned by the webserver.

To exploit the vulnerability, a report has to have been exported into the Excel format. The server then returns the latest Excel file, whenever the GET Parameter “export_csv” with a value of “true” is passed to the backend. However, this URL handler does not perform any authentication checks, which allows an attacker to access the file contents unauthenticated:

An attacker that abuses either of the authentication bypass vulnerabilities could cause the following damage:

This could lead to a considerable loss of confidentiality for the data processed by NEX Forms.

Both vulnerabilities were fixed in the subsequent release of the vendor. More information can be found under: https://codecanyon.net/item/nexforms-the-ultimate-wordpress-form-builder/7103891.

We thank the Envato Security Team for patch coordination with the developers and the fast remediation of the identified vulnerabilities.